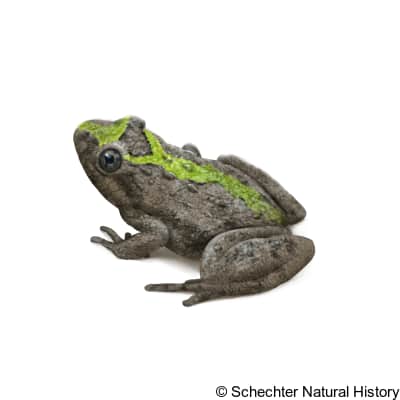 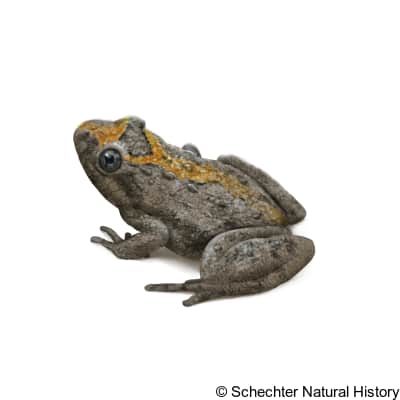 This species of frog has been listed as endangered in Wisconsin, Michigan, and Minnesota. They can be found in other USA states including Arkansas, Colorado, Illinois, Indiana, Iowa, Kansas, Kentucky, Louisiana, Mississippi, Missouri, Nebraska, New Mexico, Oklahoma, Ohio, South Dakota, and Texas. Outside the United States, they can be found distributed in Canada and Mexico.

They thrive in lakes, ponds, and many locales near streams and rivers; marshes, sedge meadows, fens, open mudflats, etc. The cricket frog cannot tolerate extreme cold weather and find burrows dug by other creatures to meet their required warmth. Breeding occurs from late May to early July then they lay 200-400 eggs attached to twigs or aquatic plants. The eggs hatch within a few days and the tadpoles metamorphose in 5 – 10 weeks but take 1 year to reach sexual maturity.

A small frog of about 0.6 – 1.5 in. It has moist, warty skin that is usually gray, tan, brown, or olive green with darker stripes on the thighs and legs. The patterns on the frog may vary, but most specimens have a dark triangle, on the head, between the eyes. Some frogs also have a medial stripe that can be green, brown, red or tan. The vocal sac takes on a darker color, sometimes tinged with yellow, during the mating/breeding season. They possess webbed hind feet with unobvious toe pads. The tadpoles are long and narrow with slim caudal fins with a black tail-tip which is believed to direct predators away from the body.