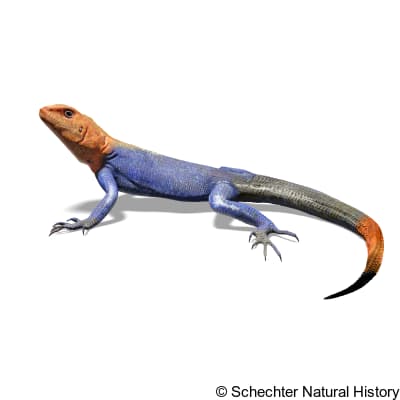 These species of animals are known to be found around West Africa which includes countries like Nigeria, Ghana, Chad, Burkina Faso, Cameroon and the east African Kenya etc.

They are found in arid regions which is best suited for them and are more active during the day except when the weather gets very hot. These species are known to claim territory, and they fight with other males to claim their space They live in groups which are made up of the lead male, female, adolescents and sub male. They are known to exhibit several behavioral patterns which includes: -Nod: This involves constant movement of the head up and down. -Bob: It can also be called push-ups. They strike this pose to females before breeding. -Challenge Pose: This is shown to intruders. -Threat Display: This is rapid movement of both head and neck. -Basking: This occurs in the morning. They feed on insects, plants, reptiles etc. They are oviparous and bob their head at the start of breeding. Males and females attain sexual maturity at different times, between 18 – 24 months. The females breed in rainy or wet season. When its time to give birth, she digs a shallow hole in a sandy but wet soil which receives sunlight. The clutch is about 5-7 eggs and hatches between 8-10 weeks.

The identification of these species is very similar to the African Redhead Agama and Rainbow Agama Lizard. These reptiles are average and relatively long. Their total length varies from 13-30 cm (5.1-11.8inches). The males have a maximum length of about 25 cm and that ofceemales is 20 cm. They have a big body and a long tail and both eyes and ears are well-developed. Their belly has a white color, their hind limbs are brown and their tails possess a stripe that runs through the middle of their dorsal surface. The stripe possesses dark spots located along the stripe, about 6-7. Other members of the specie are seen to have almost the same color.