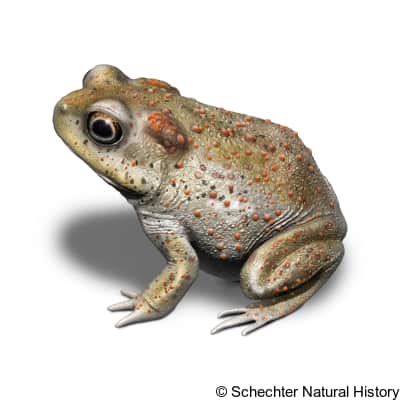 Large range in the southwestern United States and most of northern and central Mexico. Northern boundaries reach central Utah and Colorado, eastern boundaries extend to central Oklahoma and Texas, and western boundaries are just shy of the southern California coast.

Stays burrowed underground most of the time in desert habitats, emerging to breed in temporary rain pools and puddles. In non-desert areas of its range, it is often found living alongside rocky streams and rivers. It also occurs in open grasslands and near springs and seepage areas, hiding in rock crevices.

A pot-bellied toad with a small, flat head and a short snout that is slightly pointed. Its average body length is 1.5-3 inches. Its parotid glands are round to oval and equal in size to its eyes. Its cranial crest is subtle or absent. Color is variable, but in general this toad has a light tan to grey background color with reddish-orange warts on its dorsal surfaces. Its ventrum is pale and usually unmarked.