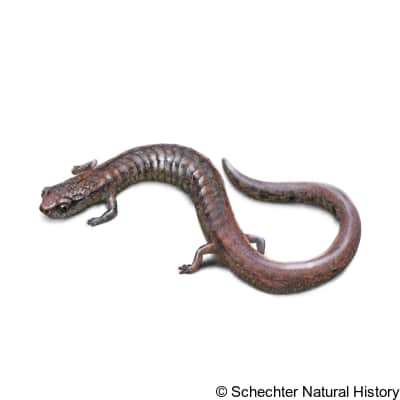 The hell hollow slender Salamander can only be found at the foothills of the western slopes of the Sierra Nevada in California, spanning from the north bank of the north fork of the American river, Placer county, to the lower Merced river canyon, Mariposa county

They dwell along riparian zones very close to large rivers and streams in pine-oak woodland and chaparral communities. They also dwell in North-facing slopes, beneath rock talus and large stones. They are always active on rainy or wet nights when the temperature is moderate but they hibernate underground when the soil dries up or the temperature is cold. They feed on small invertebrates, using a projectile tongue to capture their prey while they stay still and wait. Females lay eggs on land in the rainy season, from November to January.

An adult hell hollow slender salamander is about 3.2-4.7 cm long from the snout to the vent. It is a slim species with a broad head, a slightly defined neck, really short limbs, a slender body, and a really long tail. It has conspicuous costal and caudal grooves that gives it a worm-like appearance. It also has 4 long and distinct fingers and toes with a grey ventral surface and a dark dorsum, having a brownish stripe that is bright at the edges and pale speckling all over the body.