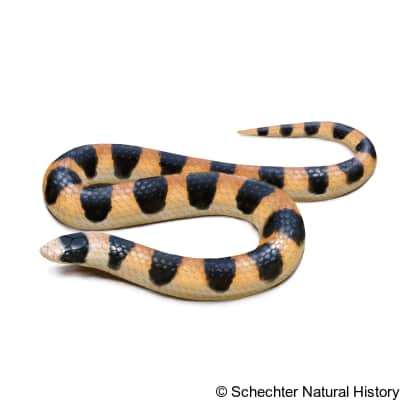 The Chilomeniscus Stramineus is found primarily in the area of south-central Arizona with isolated populations in the southwestern part of the state extending far west as the vicinity of Liguria in Yuma County.

They are found in arid deserts with sandy or loamy soils, creosote bush flats, arroyos and areas grown with mesquite and saguaro. They are nocturnal snakes’ barely making appearances during the day consistently burrowing for invertebrates such as grasshoppers, cockroaches, and centipedes. They are usually found full of eggs between June and July with mating taking place in late spring and an average of four clutches of eggs laid in the summer. It is known to hibernate during winter months.

It is a small snake measuring up to 11 inches, it is smoothly rounded has shiny scales with a narrow head and flat snout. It has nasal valves with counter set lower jaws, small upturned jaws, and a concave abdomen. It has dorsal saddles on its back colored black or brown which usually circles its body. Its ground color varies from cream to yellow or reddish-orange to strawberry and it has a cream to pale yellow abdomen without markings. Its inter-nasal scales are separated by large rostral scales. It has round pupils and a head not distinct from its thick neck.