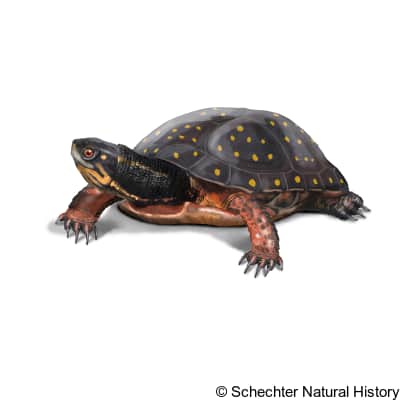 This spotted turtle can be discovered in southern Maine, Quebec, and Ontario, which is south along the eastern US to Florida in the east and Ohio in the west. A few are also reported in Canada, North and South Carolina, Indiana, and central Georgia.

The spotted turtle occupies habitats like swamps, bogs, fens, marshes, woodland streams, and wet pastures. They adapt to areas of soft substrate and aquatic vegetation. They also spend time on land, basking near patches of grasses near the water body. The females lay their eggs in the sunny soil of the land or the nest of a muskrat. They are active hunters that seek out their aquatic prey by pointing the head into the aquatic plants. It is omnivorous and only eats in the water, feeding on wild cranberries, algae, worms, slugs, millipedes, tadpoles, salamanders and a series of small fish. It is very active during spring but they hide under leaf litter or marsh edges during summer.

It is a small species that grows to 3.5-12.5 cm in length. It has a base color of either grey or black on a smooth upper shell. It is without a keel that runs down the middle. It is black with a minimum of 1, and a maximum of 100 yellow spots. It has been discovered that more spots are located on the left side of the upper shell, although, spots could be seen on the limbs, head, and neck. The bottom shell is orange-yellow and each section of the shell has a black spot, but the surface darkens as it ages. The head is black, with a large orange blotch on each side. Also, its upper jaw is notched. While Adult males have a tan chin, brown eyes, concave bottom shell, and a long thick tail, females have yellow chins, convex bottom shells, orange eyes and a shorter tail.