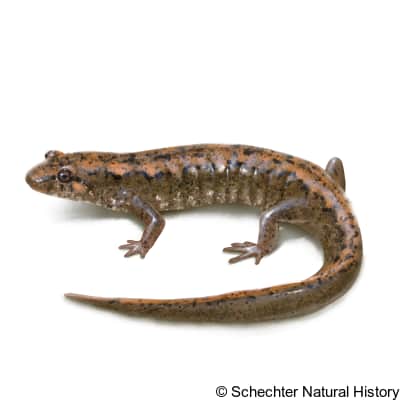 Spotted dusky salamanders are best found near cool streams and small rivers. They can also be found near wooded streams, seepage hillsides, weed-choked streams, and underneath stones, logs, bark, and various debris on the ground. They are found in different habitat but it must be moist and near a fresh water source. They mate in the fall and spring and their reproduction is semi-aquatic. The females deposit eggs under rocks or logs. The larvae feed on mites, clams, and copepods while adults feed on ants, spiders, beetles, caterpillars, mites and many types of insects.

This is a lungless, sturdy salamander with a keeled tail and is moderately-sized (between 2.5-5.0 inches). The dorsum is usually spotted with about 7 pairs of golden flecks and sometimes the spots may form a bordered stripe. The underside is typically light with dark spots. The background coloration varies by range but colors include a muddy brown, light brown, yellowish-brown, and dark green.