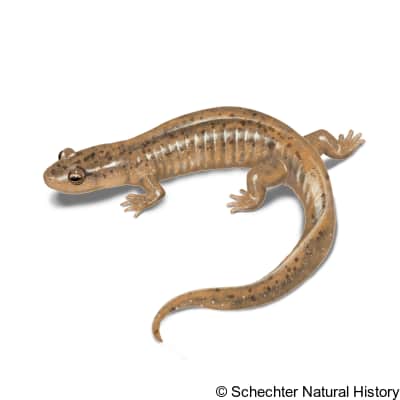 The Desmognathus welteri presently occupies the Cumberland Mountains and Cumberland Plateau in southwestern Kentucky. It can also be found in southern West Virginia, eastern Virginia, and north-central Tennessee.

They are usually found along permanent, small – to medium-sized streams. Thee streams have moderate to steep gradients found in mesic forests at an elevation from 300 – 800 m. they can also be found on large rocks and the stream banks. They feed on adult dipterans, coleopterans, winged hymenopterans, larval dipterans and larval lepidopterans. Breeding takes place in spring and hatching occurs in September. They lay up to 4 clutches of eggs averaged at 26.

The Desmognathus welteri is one of the largest among the Desmognathus genus. They grow up to 170 mm in total length. They usually have 14 costal grooves. The background colour of the dorsum is usually light to dark brownish overlapped with alterable amounts of scattered dark brown to black vermiculations, small spot and streaks. Although some lack nearly all such markings. Instead, they are a uniform sandy colour. Most of these specie show two lines of light spots going along their side. There’s usually one at eye level stretching back onto the tail while the other one lies between the front and hind limbs. The male Desmognathus welteri are usually larger than females. They have a small mental gland at the apex of the jaws. They also have papillose cloacal lips.