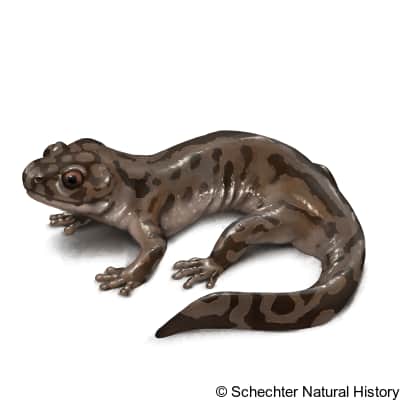 The coastal giant salamander can be found from Mendocino County near Point Arena, north along the coast and into the north coast mountain. They range as far east as Shasta Reservoir. Shasta County and McCloud, Siskiyou County and north to the Oregon border. They also can be found north-west of the Cascade mountains into extreme southwestern British Columbia. Although, they are absent from the Olympic Peninsula in Washington.

They can be in wet forests in or close to clear, cold streams and rivers. They can also be found in or near mountain lakes and ponds. Additionally, they also take shelter under rocks, logs, in logs, and burrows and root channels. They usually stay in underground retreats later coming out to forage on the forest floor on rainy nights. They feed on a variety of things like invertebrates, small vertebrates and other giant salamanders. Breeding usually occurs in May where a clutch of about 135 – 200 eggs are laid. Hatching takes place in November and December.

The adult coastal giant salamander is about 62.5 – 170 mm from snout to vent and is up to 340 mm in total length. Their neotenic larvae may grow to about 350 mm. This specie is the largest terrestrial salamander in North America. Its body is large and robust also having a massive head and stout limbs. Its tail is flattened from side to side and the transformed adults have 12 – 13 indifferentiable coastal grooves. This specie’s ground colour is dark brown to almost black which is overlaid with light brown spotting. It could also be fine-grained marbling. The aged animals may lose their pattern with the exclusion of their heads. Lastly, its venter is white to light-dark, but it can also be dark.