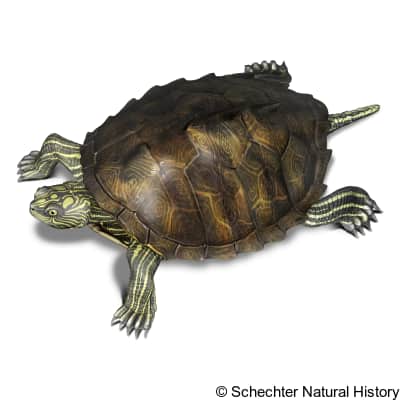 Sabine Map Turtles, like many other map turtles, have a relatively small range. They are endemic to the United States, specifically, to the Sabine River system in Texas and Louisiana.

The Sabine Map Turtles primarily occupy seasides. They have a high preference towards the deep sections of rivers with mud and high quality basking sites. Sabine map turtle is omnivorous and feeds mainly on small aquatic animals (like insects), algae and aquatic plants. These turtles are cold blooded and so end up spending a significant part of their day basking relentlessly. Typically, they are found to be wary and difficult to approach during these periods.

Sabine Map Turtles are medium to large size map turtles. They are one of the most specialized group of turtles with a unique body form. Its head is relatively small and is connected to a set of low vertebral spines that are strongly serrated on the rear. The eyes have light yellow spots behind and under, and also, there is a black stripe in the middle, on top of the absurdly small head. Carapace, that is, the shell structure is usually olive, dark brown or black in coloration with connected yellow markings. The underside or rather the vertebral surface of the shell varies from cream to yellow and at the same time, patterned with dark lines and curves. The males are noticeably smaller than females. The males can grow to be as large as 5 in (12cm) in carapace length while the females can grow to be up to 10 in (25cm) in carapace length. The males happen to have longer and wider tails than females.