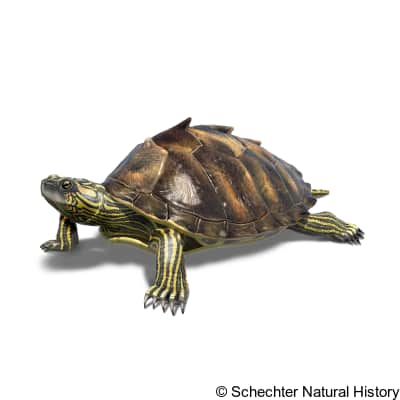 Texas Map Turtles are found in the Colorado river on the Edwards Plateau of central Texas, as their name suggests.

Texas Map Turtles have been observed to be aggressive baskers. Coupled with that, they are fast moving and excellent swimmers. They enjoy shallow streams with moderate currents to aid basking. The Texas Map Turtles are quite long lived and longevity can easily exceed 35 years. Notably, this specie changes as it grows older. So in the real sense, the young ones are primarily carnivorous, feeding mainly on insects and small fishes while mature individuals grow to be omnivores feeding on molluscs, insects, carrion and vegetation, snails, worm, fish, aquatic plants. Generally, map turtles as a class, have a reputation for being prone to health problems but this is reputedly less of an issue for Texas Map Turtles. They are rarely found moving on land. Also, it is found that after mating, the female lays eggs of not more than 6 eggs and they hatch after 2 to 3 months of incubation.

Texas Map Turtles are the smallest of all map turtle species. They have an oblong body shape and distinguishingly, have three bright yellow or yellow-orange circles on the chin. Their shells are olive-brown and have yellow markings and wavy lines on them. They have a moderately broad head, a J-shaped head mark that runs vertically behind each eye, a vertebral keel and an underside that is mostly cream in colour. The head, neck, limbs, and tail of these species are green, marked with intricate yellow-orange lines. The females are able to grow and attain a shell length of 5 inches and the males are relatively small and only attain a shell length of 3.5 inches at maturity. The males have a longer and broader tails with vent attachment to the carapace edge while females have shorter and thinner tails. Fortunately, one is able to differentiate the matured males from females by the presence of elongated nails on their front legs. Asides this, the rear edge of the carapace is strongly serrated.