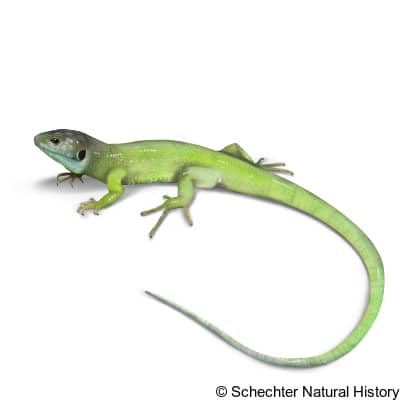 It often dwells in dense, bushy vegetation in open woodlands, hedgerows, field margins, and bramble thickets. They like to bask in the sun, early or late in the day. It feeds on insects and other small invertebrates mainly, but it has been reported to feed on fruits, bird eggs, fledglings, smaller lizards, and even mice. During spring, the females lay 6 to 20 eggs, which hatches between 2 and 4 months. Juveniles grow twice their size in a year.

The green lizard reaches up to 5.9 inches from the muzzle tip to the Cloaca. Although, the tail could grow up to twice the length of the body, giving the full length of almost 16 inches. It has a uniform green skin coloration with a bluish throat which is more pronounced in males. Males have a bigger head and body than females. It also has small spots on its dorsum, while the females display 2-4 light bands, bordered by black spots, on their Dorsum. Newly-born Juveniles have a pale-brown pigmentation with a snout-to-vent length of 3-4 cm.