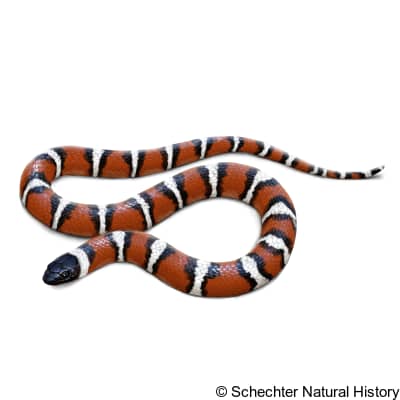 Can be found in grassy fields, wooded slopes, agricultural areas, mountains, and rocky outcrops. Spends most of its time hidden either under rocks and logs or burrowed in the ground. Snakes, mice and lizards are its most common diet but will also eat insects, earthworms, and frogs.

Tan or gray dorsum with three to five rows of reddish-brown blotches with black edges followed by white bands. Rear of head usually exhibits a tan or gray mark that resembles a "V" or "Y." White belly with square black markings; similar in appearance to a checkerboard. Adults and young appear alike, but young possess much redder blotches. When born, usually are about 6 inches and can grow to about 4 feet. Males usually are larger in size than females. Mating occurs between May to late June and females lay their eggs in June or July. Clutch sizes range from 3 to 24 eggs. Eggs incubate for two months and will hatch in August or September.