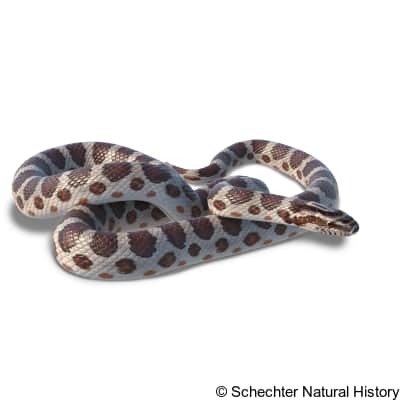 It is found in Arkansas and also scattered in different part like Missouri, Nebraska to Colorado, United States of America.

It prefers habitats with a supply of trees where it can nest as it is a climber snake and open grassland but aren’t exclusive to these habitats. It can also be found on coastal plain, semi- arid regions and rocky regions. This reptile is a nocturnal animal and hence quite secretive. It is an excellent climber and relies mainly on camouflage for self-defense. It feeds upon small mammals and mostly non-carnivorous birds by catching, constricting and finally swallowing them. It is preyed upon by hawks. Being an oviparous animal, it hibernates through the winter, mates and breeds during spring. It lays its eggs (laying clutches of up to 25 eggs) and hatches its young by summer.

Slowinski’s corn snake is a medium-sized snake. It is usually colored brown or grayish-brown, with a series of large, alternating, chocolate-brown blotch pattern which are often bordered in black. It seems to have gotten its corn snake name from its belly which appears like a corn; checkers of black and white. It has a spearhead marking on its head. It has a flat belly with steep lateral sides.