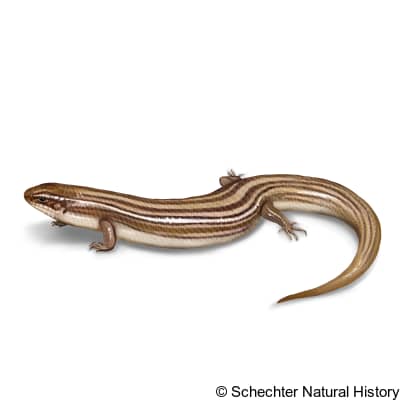 The subspecies *P. m. multivirgatus* is found in the northern plains region and prefers sandy substrate. The other subspecies, *P. m. epipleurotus*, lives in the southwest region and is found in rocky areas at higher elevations. It often hides beneath ground debris and can be found in grasslands and wooded areas.

This mid-sized skink averages 7.5 inches in total length. It is known for its long tail that can be twice its body length, and its numerous black longitudinal stripes. Like most skinks, it has a thick torpedo-like body with small legs set far apart, and smooth shiny scales. One subspecies is olive grey with multiple black lines, while the other subspecies has 2 white dorsolateral stripes in addition to the many black lines. Juveniles have a bright blue tail that fades to olive grey and develops black lines with age.