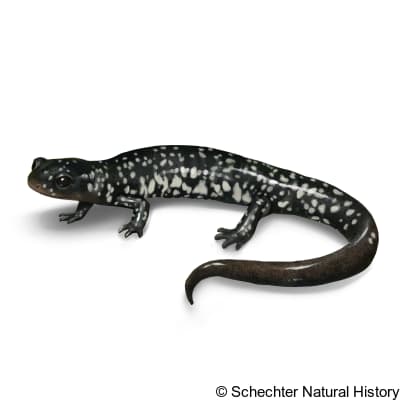 Wide-ranging in the eastern United States from central New York to central Alabama and Georgia, west to southern Illinois, and excluding most of the coastal states from Delaware to South Carolina. Disjunct populations exist in southern New Hampshire and northwestern Connecticut.

Like many salamanders, this species is most often found in moist leaf litter, under rotting logs or rocks, or within abandoned burrows near bodies of fresh water. It prefers habitat within mature hardwood forests and old pine stands.

A somewhat thick-bodied salamander averaging 5-7 inches in total length. It has 16-17 costal grooves and a wide, flat head. Its legs are well-developed but thin, and its tail is round in cross-section. It is dark grey to black with whitish spots and blotches all over its body. These light markings tend to be more numerous on its sides.