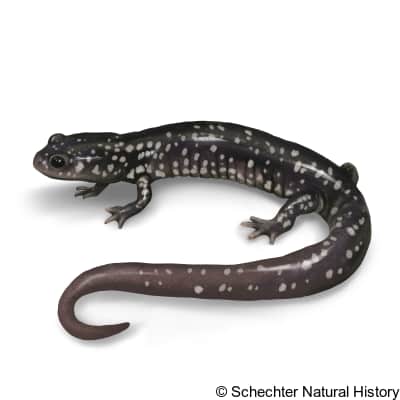 The southeastern slimy salamander is found mostly across the northern half of Florida through Southern Alabama areas and Southwestern Georgia. In Alabama, they are usually found to the south of the Coosa river and east of the Alabama river.

They are solely terrestrial amphibians and are commonly found in moist area under logs, rocks or scattered logs in forested areas, in human debris like tires, roofing. It can also be found in limestone habitats like sinkholes. The males use chemical, visual and tactile cues to court the female. Mating usually takes place midsummer (mid-July to mid-August). The females lay 5 - 20 eggs and protect their eggs from deposition to hatching. The offspring mature in the eggs skipping the aquatic larval stage. On hatching, the offspring leave the nest. They feed on invertebrates like earthworms, beetles, spiders, flies, snails. They defend their territory from other slimy salamanders. They secrete a sticky noxious mucus from their tails as a defense mechanism when threatened

They are large woodland salamanders measuring about 4 - 7 inches which is about 10 - 17 in centimetres. Their bodies range from a black color to a bluish-black color with white or otherwise brassy speckles. The speckles come together to form a white, highly mottled pattern along the sides of the body. It's belly is coloured uniform black. It's tail is progressively blade- like towards the tip.