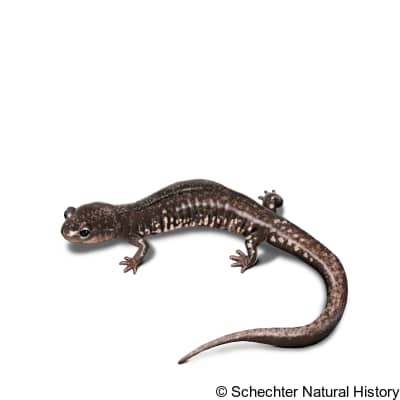 This specie is usually found in woodlands except bottomlands which are subject to continual changes. They can be found underneath logs and stones in wood. Also, in crevices of shale banks and alongside wooden gullies and ravines. They prefer moist but not saturated soil which shows in their increased activity near the surface spring to fall. They are usually here except when dry. They breed from August to September. In the coastal plain, these eggs are laid yearly in the late summer or fall while in the mountains, they are laid every other spring. Their diet is made up of a variety of invertebrates. These include, but not limited to, earthworms, snails, slugs and spiders.

The Savannah Slimy Salamander is an overall black colour. This colour is then overlaid with numerous silvery spots or gold spots across its back. Its total length ranges from 120 – 170 mm which includes its tail, but it has been seen to grow up to 206 mm. also, the males are not easily distinguishable from the females although the females are usually larger. Also, this salamander has 15 – 17 coastal grooves. This specie also has intercostal folds between its appressed limbs. Glands in the skin are present mostly on its tail which exudes a sticky substance. Lastly, it has a prehensile tail.