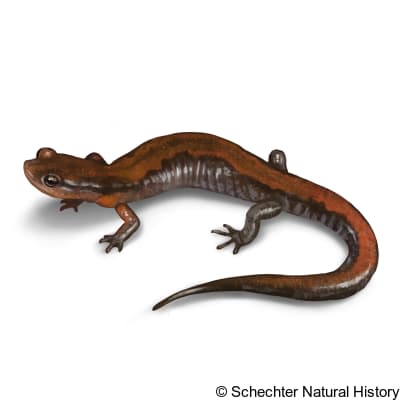 It is endemic in the United States of America and has been found in small areas of western North Carolina (in Asheville), northwestern Georgia and northern Alabama all in the USA.

This salamander is rare and may be found in wooded areas, especially near cave mouths and springs that are in such areas. It also lives in rocky areas that provide deep, cool crevices and slits. Summer highly deactivates the Southern zigzag salamander and it then retreats underground or just becomes inactive. Its female deposit eggs after moving to underground retreats by the end of spring or beginning of summer. These eggs can averagely be up to 5 eggs in a clutch which are attached within cave formations by sticky outer membranes. They dine on a wide choice of invertebrates and insects they forage from the forest floor and while they are prey to many hungry forest carnivores.

The Southern zigzag salamander is a dark grey colored salamander with a wavy or a more like jagged “zigzag” stripe which runs down back, however this stripe is usually dark and thus hard to distinguish from the body on first observation. Its lateral sides are also dark but with some speckling of white color. While the belly is typically dark grey, it may show small traces of yellow or red pigments. Its head is slender with the sides behind the eyes slightly coming together to the lateral extensions of its gular fold. Its snout is also unusually bluntly pointed. It measures about 64mm -89mm in length, no wonder it’s one of the small salamanders.