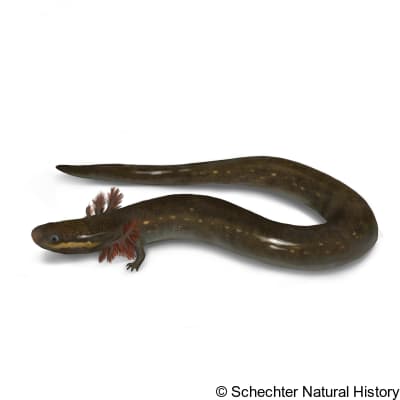 Extensive range along the Gulf Coast from south Texas to western South Carolina. It extends north into central Alabama and most of Georgia, as well as a narrow corridor through southwest Oklahoma, most of Arkansas, northern Mississippi, eastern Missouri, then crosses the Mississippi River into central Illinois and southeastern Wisconsin. A section of range also follows the Rio Grande River along the southernmost border of Texas and Mexico.

Spends most of its time burrowing and foraging in the mucky debris and mud at the bottom of slow-moving bodies of fresh water. It will burrow deep into the mud if the water source dries out, where it can remain for months, even secreting a slimy substance from its skin to protect it from dehydration if the mud becomes dry.

An elongated aquatic salamander that is eel-like in appearance. It lacks hind legs, but has 2 small front limbs, just behind the external gills. It has a thick, round body, an elongated, flattened, trapezoid-shaped head, and a laterally compressed tail with narrow dorsal and ventral fins. Its small, rudimentary eyes are set wide apart near the front of the face. It can reach up to 27 inches in length. Juveniles have some patterning on their head, but adults are quite plain.