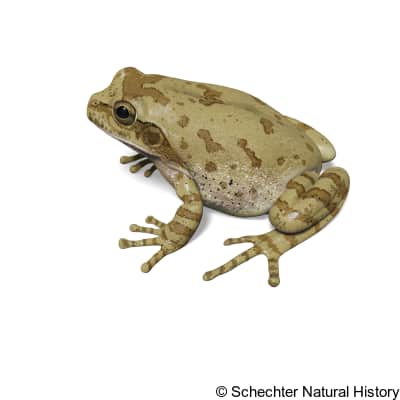 Ranges throughout most of coastal Mexico, and Central America. The northern tip of its range extends into deep south Texas, and it has a couple disjunct patches of range around San Antonio and north of Corpus Christi, Texas.

This species usually occurs in lightly forested habitats close to permanent bodies of water. It is most often found clinging to large leaves, branches, or rock faces. It will hide under loose bark or in the holes of tree trunks. It has been observed living at the tops of palm trees.

Typically this frog is brown with darker brown blotchy patterns on its smooth skin, but it can also be green with some brown markings on its face and legs. It is sexually dimorphic with males being much smaller than females. Males average 5-7.5 cm in length, while females often exceed 9 cm. It often has 2 separate dark bands on its face, running from the nostrils, through the eyes, and along the sides of the face and neck. The blotchy pattern on its back is irregular, but usually there is a large patch in the center of the back with 2 "arms" that extend toward the back of each eye. Its limbs are banded, and its ventrum is pale and unmarked. It has a bi-lobed gular sac and large toe pads. When resting, its body is usually quite flattened.