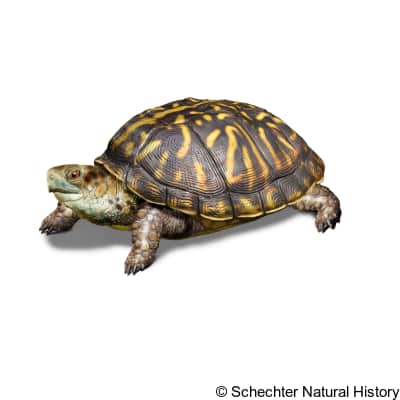 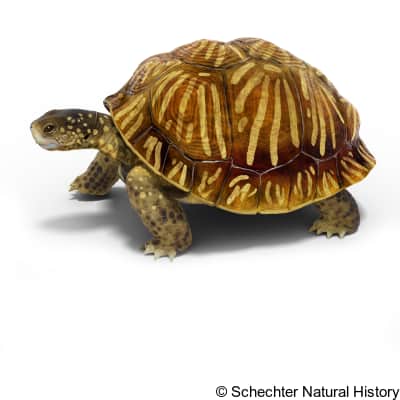 Widespread throughout the central United States. Range stretches from southern South Dakota down through the entire state of Texas. In the east, it mostly extends to the Mississippi River, with a few patches in Wisconsin, Illinois, and Indiana. In the west, it is found east of the Rockies and through southern New Mexico, southeastern Arizona, and into adjacent northern Mexico.

Of all the box turtle species, this one inhabits the driest environments. It is strictly terrestrial and prefers grassland habitats. It will burrow underground to hibernate or escape high temperatures. It likes areas with lots of leaf litter, and is usually found in habitats with small ground vegetation. Rarely, it will live near ponds and wetlands.

This small, terrestrial turtle is named for the ornate pattern of yellow lines and striations on its dark carapace, and the central hinge in its plastron that allows it to completely close itself into its shell. It has legs and feet like a tortoise for living on land, and a high-domed shell. When viewed from above, it is slightly oval shaped. Its carapace is smooth, with very subtle pyramiding of the scutes. It has a prominent beak for biting through tough vegetation, and its front legs have large, hard scales compared to the small, soft scales on its hind legs. It typically has a solid or broken central stripe down its back, and yellow to orange spots on the scales of the front legs. Its plastron is usually brown with yellow lines and striations, or it can be solid yellow. It averages 15 cm in carapace length.