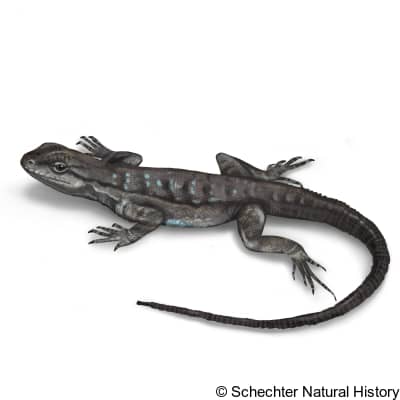 They occur in a wide variety of habitats. They can be found in rocky places with reasonable vegetation. In desert locales, they need plants for cover but avoids extreme desert conditions. They feed on small invertebrates and our quick to run underground to escape predators. This species of lizard is oviparous and breeds through summer in April. They lay eggs in one or two clutches of 4 – 8 eggs.

It is a small lizard averaging 1.5 – 2 in. in length. The scales are small and grainy with larger scales running down the middle its back where there is sometimes a brown or gray stripe. It has a long thin tail with keeled scales that detaches easily but regenerates. This tail is usually black (especially with males) except for the ones west of the mountains. The lizard is colored brown, sooty, spotting on its back a pattern of dark blotches and in some cases crossbars instead. It sometimes has yellow-brown or rust-colored markings on its neck, tail and upper sides. The underside is white or gray-yellow with darker colors under its tail. The males display orange or yellow (or both colors) in the middle of the throat and wide blue patches on the belly which may extend to meet at the center and cover the entire belly. Meanwhile, the females have no blue on the belly but also have orange, yellow or white colors on the throat.