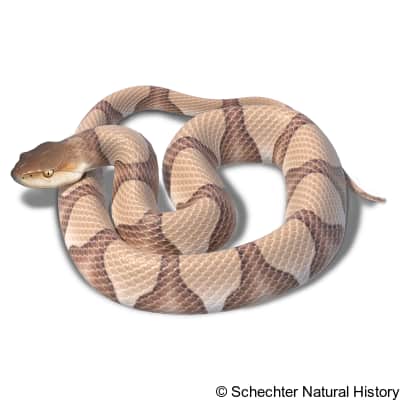 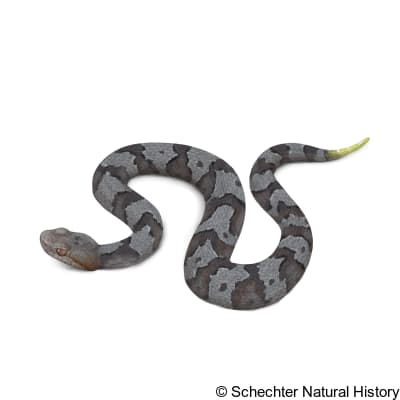 Ranges throughout most of the eastern half of the United States, primarily south of New York state and north of Florida, with an extension of range through Connecticut, Rhode Island, and southern Massachusetts.

Most often found in mixed woodlands or deciduous forests, and likes to hang out on rocky ledges. Can also be found in low-lying swampy areas. It hibernates in dens or rock crevices during the winter months.

A typically brown or copper colored venomous snake with irregular patterning that resembles leaf litter on rough, keeled scales. Some markings form amorphous bands across the back, while others are unconnected patches on the sides of the body. These markings are darker around the edges and fade to lighter coloration in the center. It has a triangular head with wide jaws and a pointed snout that extends forward beyond the mouth. The snake's tail is often darker and banded. There is usually a thin horizontal line separating dark from light coloration running behind each eye. They average in length from 20-37 inches, but can rarely exceed 1 meter, with males larger than females. They have a thick body.