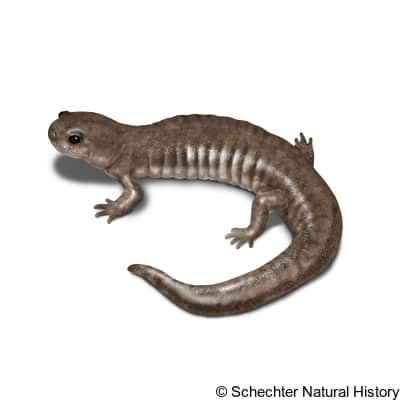 The streamside salamander is endemic to North America. They are native to central Kentucky and have a range that extends into some southwestern regions of Ohio as well as parts of southeastern Indiana. There is a small population recorded to be found in far northwestern West Virginia. There are also populations recently reported in the Central Basin of middle Tennessee.

They are found in deciduous forests and often inhabit burrows near headwaters with plenty of limestones and exposed bedrock. Shallow, ephemeral streams are used by adult salamanders for breeding and egg deposition. The breeding season is marked with the migration of male adult salamanders to breeding sites from late October to early March. Larvae feed on macrozooplankton and isopods. The adults eat insects and their larvae.

They are medium-sized mole salamanders (averagely 6 inches total length) with about 15 costal grooves on their sides. The limbs are thick and have four numbers each. They have a mottled coloration of gray and a small head and mouth. Some specimens have undersides of dull blue that extend to the legs and underneath the jaw. Meanwhile, some specimen have a completely blue background with dark flecks all over the body. Streamside salamanders also have a wide dorsal maxillary process.