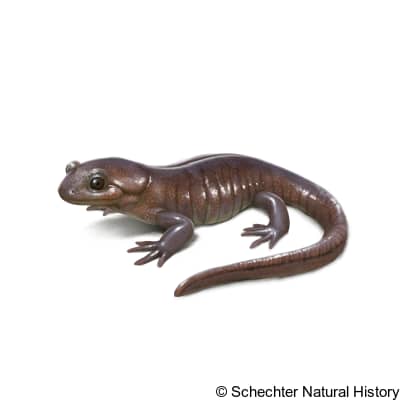 Typically live underground in open grassland, woodland, and forest areas near breeding ponds. During breeding season, they can be found underneath rocks and logs, and other moist, sheltered, areas like rodent burrows. Adult and larvae are distasteful to fish and bullfrogs, so eggs can be laid in lakes, ponds, or streams.

Large and heavy bodied with broad head, blunt snout, and small eyes. Skin is either dark brown, grey, or black, and is moist and smooth. Oval parotid glands behind the eyes, with ridged lines along the side of the body. Adults underground most of their life utilizing tunnels of burrowing mammals as passages and living places. They can be seen outside on rainy nights or during migrations to and from breeding grounds. When engaging in aggressive or defensive behavior, they emit a ticking sound from a defensive stance. Females lay 30-270 eggs in grapefruit-sized masses and attach them to underwater branches or grass. Algae supplies the eggs with oxygen, and they hatch within 2-9 weeks. Larvae brown or olive green, have long feathery gills and dark pigment on the base of the dorsal fin.