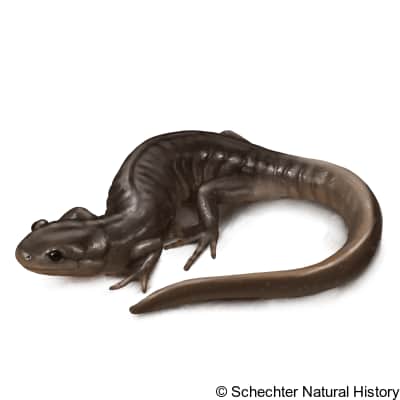 This salamander has a wide range from eastern Illinois to southeastern New York through Pennsylvania and eastern and southern Ohio to southern Indiana, and southward to south-central Kentucky, northern Virginia, West Virginia and southwestern England.

They can be found in deciduous woodland with swamps, streams, and pools. You can find them in large numbers on river flats where they seek shelter from day underneath logs, bark, leaf litter, and other surfaces. They lay eggs in ponds and sinkholes where the aquatic stage juveniles feed in the stratum near the surface at night. Breeding is triggered by the first spring rains and it occurs in vernal pools. Females then migrate to the ponds to lay eggs in March or early April. Generally, these salamanders feed on insects and a variety of other invertebrates. Larvae feed on zooplankton and graduate to bigger organisms like nematodes, insects, and snails or even small larvae of their kind.

Jefferson salamander has a long (5.5 – 8.3 inches) and slender body and toes. The dorsal surface is typically brown, dark gray or black with a lighter shade near the head and pale blue flecks on the sides. Although the blue flecks may be absent in adults while juvenile salamanders possess more apparent flecks.. Costal grooves on this salamander count up to 12. Sexual dimorphism is apparent with larger males, with longer legs, broader snouts, and lighter colors. The females occur in gray to gray-brown.