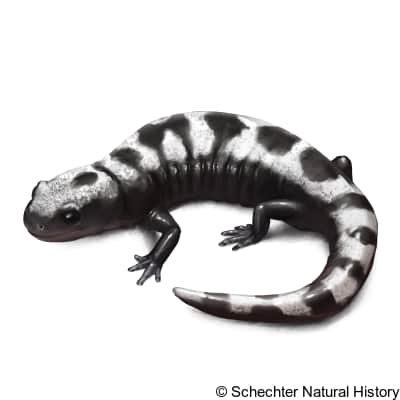 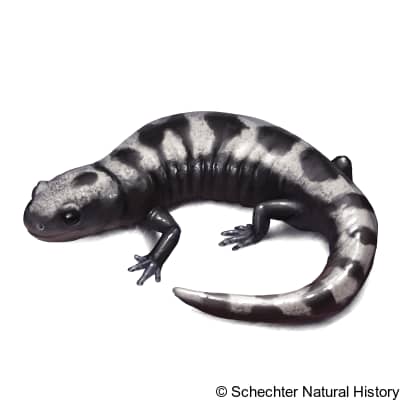 Marbled salamanders can be found in the eastern United States, from southern New England to northern Florida, and west to the states of Illinois and Texas. They have been discovered as far north as New Hampshire, with only two sightings reported though.

They dwell in damp woodlands, forests, and places with soft and wet soil. Seasonally flooded areas are essential for breeding, but the marbled salamanders do not enter the water. Adults feed on terrestrial invertebrates like worms, insects, centipedes, snails, and slugs. Juveniles feed on small aquatic animals like plankton. An Adult marbled salamander spends most of its time in burrows or under logs. Females brood on land and build nests to keep their clusters of eggs. Juveniles hatch early compared to most salamanders and gain a size advantage by feeding and growing during spring. Larvae typically mature as quickly as two months in the southern habitat but take up to six months to mature in the northern part.

The marbled salamander is a stocky and boldly-banded species of Salamander. It has a shiny greenish black base with bands of grey(female) or white(male). Adults grow to about 11 cm. Males tend to mature at an earlier age than females as the average age at first reproduction for males is 2.5–3.3 years and for females, 2.8- 4.0 years. The average size at first reproduction is about 53–60 mm for both sexes.