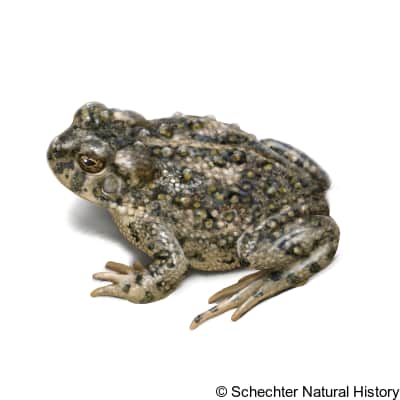 The arroyo toad is mostly found in the sandy or cobbly washes with a swift current in Southern California, from Santa Barbara County in the south to Baja California in northwestern Mexico.

The arroyo toad inhabits the areas along the creeks and rivers with shallow pebble-like rocks near sandy terrains. Adults take refuge in the sandy soil for protection and shelter. They like places with little or no vegetation. In the dry season, the arroyo toad hibernates, in what is called aestivation to prevent dehydration. This state normally takes place either in clay-like sand or soil from August to January every year. The arroyo toad is nocturnal, spending most of its day underground away from the sun, surfacing to eat and mate. The female lays their eggs by a pool of water in a two-row formation with an average of 4700 eggs. It takes the eggs four to six days to hatch. The diet of adult arroyo toad usually consists of caterpillars, moths, crickets, snails and in some instances the larvae of other arroyo toads.

It is a stocky, blunt-nosed, warty-skinned species of toad. It is about 5-7.5 cm(2.0-3.0 inches) in length, with horizontal pupils. It is greenish, gray or salmon on its back with a light-colored stripe across the head and eyelids. Adults are generally larger with light actual and mid-dorsal patches, oval and widely separated extra skin on the neck. It has a red-tipped tubercle on the back. Also, it has very strong hinge muscles that make it easy for hopping from one position to another. The young are ashy-white or olive with or without black spotting.