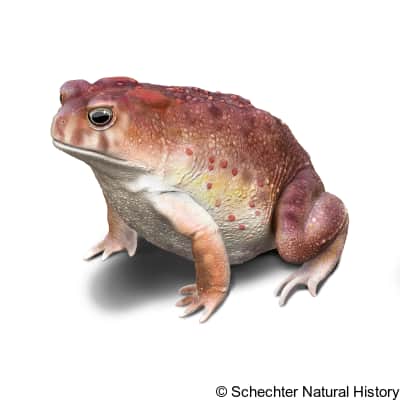 The total range of this specie is fragmented. It goes from the Colorado River drainage close to Fort Mojave, east across central Arizona into western New Mexico. Lastly, it can be found around the area where the Nevada, Utah, and Arizona borders meet.

They can be found in riparian areas from lowlands. These are close to the Colorado River drainage in California, into uplands and pine-oak woodland. They are nocturnally active and remain underground in the daytime. They can also be often seen moving around in daylight or relaxing at the edge of breeding pools in the breeding season. They feed on a variety of invertebrates. Their breeding is aquatic and it occurs early to late February but sometimes late March to early April at higher elevations. The average clutch size is about 4,500 eggs and hatching takes place in 3-6 days.

They grow to about 48 to 86 mm from snout to vent. They are plump and stocky with dry skin and low warts. They also have few tubercles and no cranial crests. These toads have oval, widely separated parotoid glands that are pale toward the front. Their pupils are also horizontal. This toad is normally grey, but it can also be beige, pale yellow, pink, rusty, and brown. They have no stripe down the middle of the back and are usually paler on the front of its parotoids, upper eyelids, and central upper back. Also, they are whitish below with no spots or mottling and the throats of both genders are pale. Lastly, their young are salmon-coloured or light olive with reddish warts.