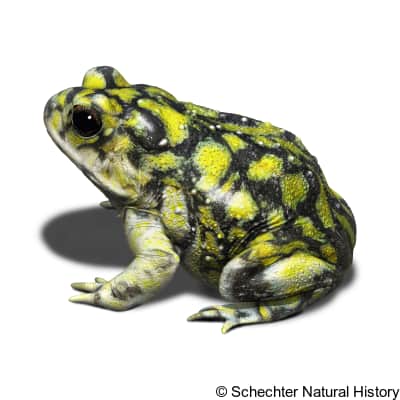 The Anaxyrus Retiformis is found in area between South Western United States ranging between Arizona in the United States and Northern Mexico.

These species are nocturnal reptiles usually found in valleys around Arizona. Males after ten months of inactivity appear at temporary pools calling to females which arrive and move into water for amplexus. These species have a preference for arid and semi-arid plains with grass. They are especially numerous in creosote flats, desert grasslands, and upland deserts. They are especially native to Pima and Pinal counties in Arizona.

This toad species is so colorful that it has earned the nickname "Jewel of the Sonoran Desert." Adult Sonoran toads grow to a maximum length of 1.9 inches in males and 2.3 inches in females. Cranial crests are usually reduced or non-existent with parotoid glands overcompensating significantly in an area approximately a third from the anterior edge. Reduced warts on the paratid glands give a dramatic black dorsal coloration or with females having significantly cream or white-colored throats whilst their male counterparts are darkly pigmented in the throat.