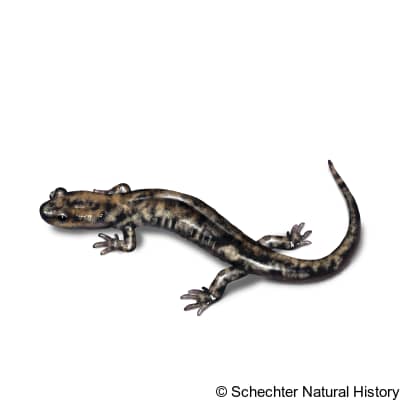 The Aneides Vagrans is native to the coastal strip of California in the United States but introduced via oak wood trade into British Columbia and Canada.

They are found in coastal areas at low elevations often at borders of clearings under barks of fallen or standing trees. They are fully terrestrial with rock faces with deep cracks containing wood debris as also suitable habitats. Reproduction is terrestrial with males achieving sexual maturity when showcasing a well-developed mental gland in their second year whilst females mature in their third year having the ability to lay 6 to 9 eggs. The females are known to stay with the eggs until they hatch. They are generalist feeders that consume small invertebrates such as ants, mites, beetles, and isopods.

The wandering salamander is long and slender and usually grows to a length of that varies from three to five inches. It has a pair of nasolabial grooves within its nose and sixteen coastal grooves on either side of its body. Its legs are relatively long with toes having expanded terminal ends with square-cut ends. It also has a prehensile tail, round in cross-section which is useful when clambering among tree branches. Its back color varies from brown to light grey marbled with bronze specks. The males have a broader and more triangular head than the females.