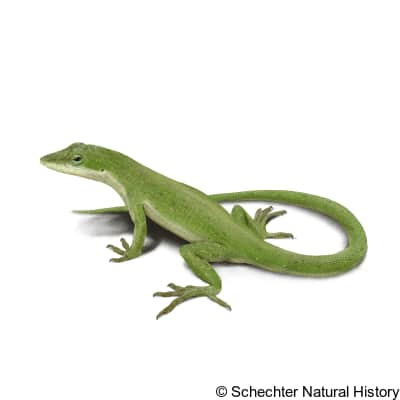 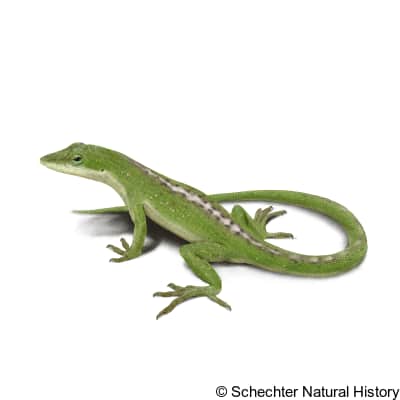 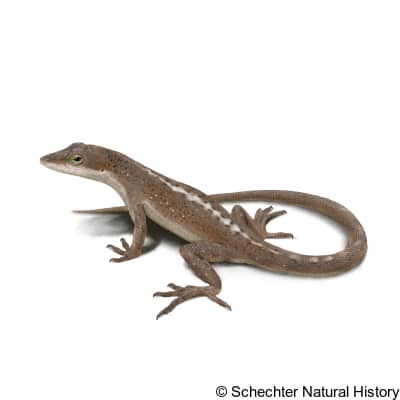 The green anole occurs throughout most of the southern United States but absent in the mountains. Its range goes north through the coastal plains of North Carolina and throughout South Carolina, then west to Texas and south through Florida. The range includes Georgia but exempts the Blue Ridge region. There are introduced species in Hawaii, Ogasawara Islands of Japan, in the Bahamas, Cuba, and Guam.

The green anole is naturally arboreal but can still be found roaming the ground. They are frequently seen on trees and shrubs in their vicinity and refer places where prey is available. They are very common in suburban areas and can be frequently seen on steps, railings, fence posts, and building sides and other human dwellings. Breeding occurs in April through August. The females lay an average of six to nine eggs per year. The eggs are laid into moist soil and hatches in seven weeks. This anole is generally insectivorous with a wide appetite; they eat beetles, flies, spiders and some arthropods. But they also eat mollusks, grain, and seeds.

The green anole is a medium-sized lizard with an average length range of 5-8 inches. The females have smaller body size in comparison to the male but both male and females have long tails that take more than half of the total body length. Scale pigmentation varies among the green anoles, but it is most common to see them in shades of brown, green or gray depending on environmental conditions (they are capable of color changes). The browner ones usually have faint markings on the back. Female anoles have a stripe that runs along the back from the neck and ends where the tail begins. Males have pink dewlaps and display it to court females.