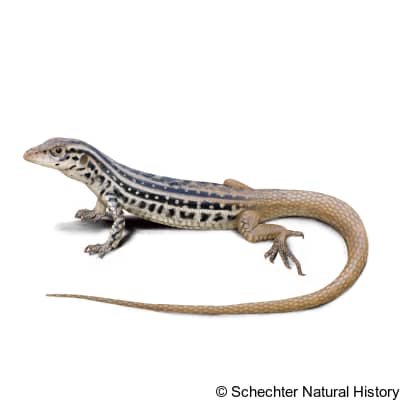 The plateau spotted whiptail is endemic to the United States specifically the state of Texas. They can be seen in the Bend Region along the Rio Grande. Outside of the United States, they can be found in the Mexican states of Chihuahua, Nuevo Leon, Durango, Coahuila and northern San Luis Potosi.

These 'racerunners' prefer arid canyon bottoms and rocky hillsides with spares vegetation. They are diurnal and referred to as racerunners because they are constantly moving, foraging for food in speed of short bursts except when threatened. They are cold-blooded and omnivorous. They eat small anthropods and plant materials. They are oviparous and mate only in summer after 'hibernating' in the long winter months. Females lay a clutch of eggs in water retaining soil which mature after about 5 months.

The plateau spotted whiptail grows up to 9 inches and in other cases over a foot. It has four limbs with the hind limbs almost double the length of the forelimbs. It is covered on the back and sides with little granular scales of about the same size. The underbelly is covered with a much larger scale which looks platelike. In females it is light colored and dark blue in males coupled with an orange chin during mating. On the back are 6 or 7 pale tan stripes that run horizontally from the neck to the top of its tail. Numerous random spots find home between these lines,giving the whiptail its peculiar name. The tail which is over 60% of its total body length is rust colored and transforms into a bright blue color at the tip.