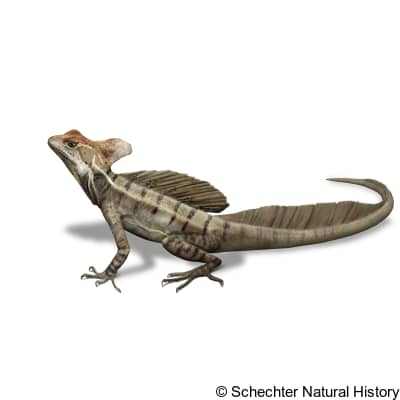 The Brown Basilisk is indigenous to Latin America. It is located from Central Mexico southward to northern Colombia. Recently, it has been found in Florida. This specie is also very widespread in Guatemala, wherever a water source is available.

The Brown Basilisk can be found in tropical and subtropical wet, moist and dry forests. It is usually found in dense vegetation along the margin of any body of water. They are arboreal creatures. They also have the wondrous ability to run on water for a few metres when startled. They feed on mostly insects and sometimes fallen berries. The females lay about 3 to 12 eggs from May to August. These eggs hatch from June to September in about 55 to 65 days.

The male gender of this specie may exceed 609.6 mm in total length, but the females are a lot smaller. The adult males have a large flaplike crest which is held up by flexible cartilage. It projects from the back of its head to its back. The specie also has a crest that runs from above their shoulders to around the level of the hind legs. In comparison, the females have a folded “hood” which outlines the back of their head, they also have a lower vertebral crest than the males. Also, the males have a more elongate snout than the females. Its head is large, and its tails and limbs are long and slender. The male and the female of this specie both are dark barred dorsally and have considerable distinct yellowish dorsolateral lines. Lastly, its lips and venter are light.