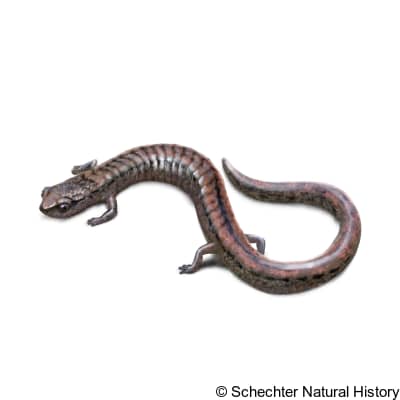 This specie is endemic to California. They occur from 3,900 – 8,200 feet in elevation. They are found on the western slopes of the southern Sierra Nevada. They can be found in the Greenhorn Mountains north to the Tule River and Kern River highland drainages. Additionally, they are also known to be seen from one area on the western edge of the Kern Plateau east of the Kern River.

They can be found in heavily forested areas of mixed conifers and deciduous oaks. They are also associated with seepages and springs which remain moist through the summer. At higher elevations, its activity is usually restricted to spring and early summer and early fall. Their diet is made up of a variety of invertebrates. Lastly, reproduction is terrestrial, and mating and egg-laying probably occurs during the rainy period. This is from November to January.

At maturity, their length from snout to vent ranges from 35 – 47 mm. It is a small slim salamander with 16 – 20 coastal grooves. It has short limbs, a narrow head and a long slender body. They also have a very long tail and conspicuous coastal and caudal grooves which give this specie a wormlike appearance which is usual of most Slender Salamanders. They have four toes on the front and hind feet, which is also usually of Slender Salamanders. Lastly, this slender salamander is blackish-brown with a reddish, yellowish or dark brown dorsal stripe. This is usually not visible in large animals.