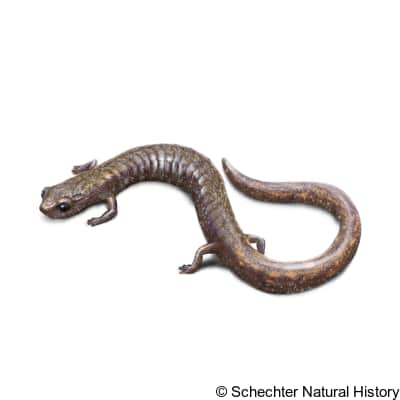 This species lives in the San Gabriel Mountains of Los Angeles County in The United States. It typically lives above 1000 meters in this county.

The San Gabriel mountains slender salamander lives in moist places on land under large rocks, fogs and bark. This species feeds on small insects like mites, small bark beetles, crickets, springtails and spiders. It uses its projectile-tongue to feed on predators. The reproduction is terrestrial. It is thought that eggs are laid underneath talus piles.

The adult of this species is usually about 3-5 cm in length. The San Gabriel slender salamander or Batrachoseps gabrieli has a worm-like body, large head and limbs and also possesses an elongate cylindrical tail which is less than its body 1.5 times. There are 18-19 coastal grooves on this species. There are four toes on the front and hind limbs. Its dorsum is black with white coppery, orange blotches and an immaculate black venter. The underside is dark and appearance and has scattered speckles.