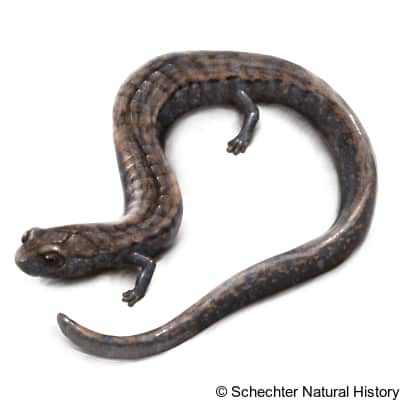 They are endemic to the western slopes of the central and southern Sierra Nevada in California. Its range extends from the southern boundary of Yosemite national park and stops near the Kern River. This salamander can be found in altitudes of up to 1800. but in its southern parts, they can’t be found beyond 900m.

They thrive in oak woodlands in the foothills but they still can be found in coniferous forests with a high elevation and the grasslands on the floor of the Central Valley. The gregarious slender salamander can still be found in the hot and dry habitats at the southern end of its range. Breeding is terrestrial and begins at the start of fall rains which may vary by year and elevation. Females lay their eggs in moist places on land – under rocks, barks, logs, or leaf litter. Nest sites can have from 10 – 300 eggs. They use their projectile tongues to ambush a variety of invertebrates.

A very small salamander, it is 1.2 – 1.8 in snout-to-vent length. This is a slim salamander with short limbs and a long slender body. It has a narrow head, a long tail that tapers at the tip, and up to 19 costal grooves. These are features that give this salamander a worm-like appearance common among many species of slender salamanders. It has a blackish colored back with a brown dorsal band that turns to tan at the neck and extends along the spine but ends at the tail. The back is flecked with white spots that shade into a pale gray in the ventral region. On its front and hind feet, it has four toes which is typical of most slender salamanders. Young salamander hatch from eggs and have the same look and form.