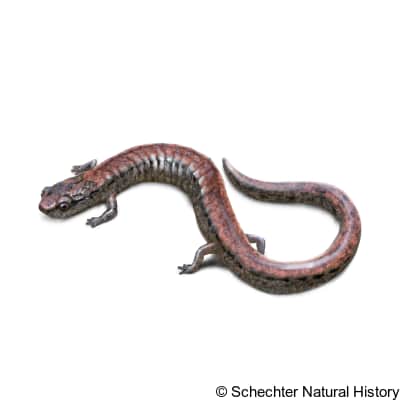 The Batrachoseps Incognitus is more commonly found in California especially in the South Western Region of Monterey and Santa Lucia mountains of San Luis Obispo counties.

They are found in wet soils of forests retreating underground when surface soils dry up or temperatures become near freezing. They are known to prefer environments of high humidity conducting their respiration through the skin and tissue linings of their mouth, negating the use of respiration through lungs. Reproduction is achieved by laying eggs on moist areas of land with eggs hatching after younglings have been fully formed tiny terrestrial salamanders. San Simeon Slender Salamanders feed on tiny invertebrates and usually adopt a sit and wait approach for preys capturing preys with projectile tongues. Salamanders are usually considered to have no voice for communication but make popping sounds when closing and opening valves. They communicate through the use of pheromone signals.

They exhibit a worm-like appearance with short limbs, narrow head, and a long slender body. They appear in colors that vary from dark grey-brown to reddish-brown having faint dorsal stripes. They have 18 to 20 coastal grooves which are conspicuous alongside its long tail that gives it the worm-like appearance. Its length is usually between 3.8 cm to 4.8 cm from its snout to its vent.