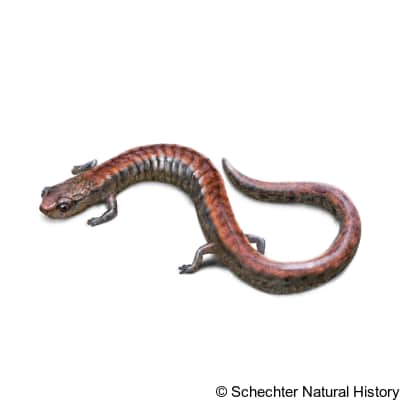 This species of salamander is endemic to California in the United States. It is known to come from Monterey County.

The habitat of this species is moist montane chaparral and woodlands. It is also found in temperate coniferous forest. The Santa Lucia Mountains slender salamander or Batrachoseps luciae feeds on insects that includes, crickets, beetles, young snails, mites and spiders. The females lay an average clutch eggs of about 5.1 and 10.6 eggs on moist places on land, underground or under surface objects. It takes an average of 78 days for eggs to hatch. The young ones develop in the eggs and they hatch directly into tiny salamander like that of an adult.

Adults are usually about 1.25-1.80 inches in length. This species is slim with about 18-19 coastal grooves. The body of this species is long, slender and shaped like that of snake. It is dark blackish-brown in color that is overlaid with a reddish or brass dorsal stripe that is less apparent. Long tails, caudal grooves and a very long tail gives the species its worm-like appearance. This salamander also has small limbs that appear vestigial in several species. The Santa Lucia Mountains slender salamander has no nucleus, no lungs and possesses a frog-like projectile tongue that is long in length. Batrachoseps Luciae are known to have four toes on the front and hind feet.