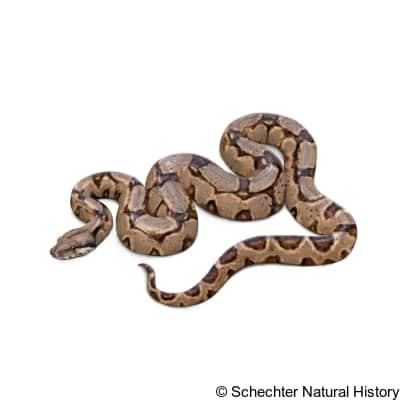 The Boa constrictor is a species of snake found throughout tropical South, Central and North America. There have been introduced populations in southern Florida and the U.S Virgin Islands.

The Boa constrictor tends to flourish in a variety of environmental conditions, ranging from tropical setting of the rainforest to arid lands. It however prefers to live in the former, as a result of the benefits the nature of the rainforest provides it with in natural cover from predators, humidity, temperature and potential prey. They are nocturnal and usually live on their own, rarely interacting with other snakes except for the sake of mating. Young boa constrictors eat small amphibians, mice, lizards, birds and bats. Their prey ranges from a variety of small to medium-sized animals and birds as they get older. They are viviparous, giving birth to their young, live. They typically breed in the dry season, (April to August), during this period, the female boa constrictor releases pheromones from her to cloaca in order to attract males, who then wrestle with one another in order to breed with her. Boa constrictors become sexually mature at 3-4 years.

They are large and thick bodied, capable of weighing up to 27kg or 60 pounds. Females are typically larger than males in length and girth, reaching sizes between 7 and 10 ft, whereas males are 6 and 8 ft. They have long and triangular heads, with typically black and dark brown markings against a pale brown and whitish background. However, these colorations and markings may vary in individuals. Dark streaks along the top of its body and extending from the eyes to the back of the jaw are also seen.