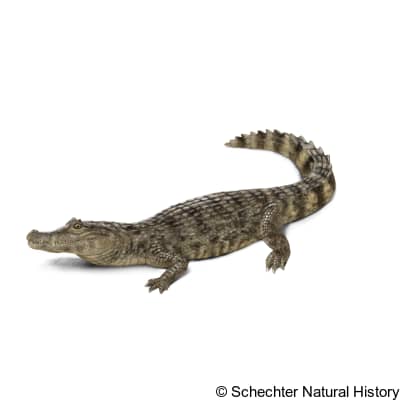 This species of crocodile can be found almost everywhere in South America especially in the Northern parts. In places like Brazil, Colombia, Costa Rica, Ecuador and El Salvador, they are regarded natives. Recent conservative practices has seen them introduced into favorable habitats in Florida, USA and Cuba. Parts where they are also regarded as natives is Central America's Mexico.

The highest altitude a crocodile of this species is expected to be found is 2625 feet. Its habitat regions include tropical, terrestrial, saltwater and freshwater habitats. Stagnant water is not an option for this species but it preferably opts for slow moving rivers or streams that are deep enough to enable full immersion of its large body. It water habitations is usually murky and serve as good camouflage for the Spectacled Caiman. The peak of breeding season is around May-August, and mating between a male and female gives a product of about 20-30 eggs. These eggs are deposited in a pre-constructed mound nest that was made from dirt and dried flora. A nest by guarded by parents acting as intermittent sentries in order to protect their eggs from getting poached by wild animals like foxes and tegu species. After 65-104 days of incubation under the ground, juveniles emerge into the world. Juveniles can stay with their parents for about a year and half for extra safety and then either venture off after that or maintain their predecessors niche. Smaller crocodiles will eat invertebrates found around their aquatic habitat while the adults diet range from fish, birds and even wild hogs or other large vertebrates that may come to the water hole for a drink. It is said that caimans have a sweet tooth for piranhas.

It is a small to average-sized crocodilian with length range of 1500 mm to 2200 mm from its head to its tail. Of course, the females are generally less in size than the males. On its head, just right between both bulging eyeballs is a bony infraorbital bridge which gives it a look of someone/some creature wearing reading spectacles. This feature largely contributes to its general name, the Spectacled Caiman. It has a long nozzle and lack the usually present protrusive fourth mandibular teeth. This teeth is not seen when its jaws are shut. It is a bilaterally symmetric creature. Dentition is ranged from about 72 to 78 powerful teeth that grow bigger as it ages. Color ranges from a dull yellow-green to dark with yellowish or dark bands patterning it.