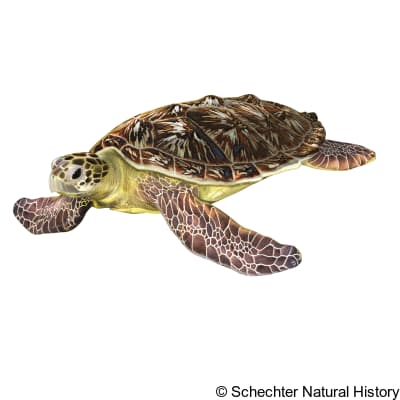 The loggerhead turtle spreads across the Pacific, Atlantic and Indian ocean, together with the Mediterranean Sea. They are mostly concentrated along the south-eastern coast of North America and in the Gulf of Mexico, with Florida being the most popular nesting site with more than 67,000 nests built in a year.

It dwells in shallow coastal waters and open ocean. Adults and young live across shallow coaster estuaries and seldom come ashore except when the adult females go to build nests and deposit eggs. The juveniles live in the floating mats of sargassum algae, which they share with other organisms and feed on them. They are mostly active during the day and they sleep at night. They sometimes fight each other to over access to feeding grounds. They are omnivorous and feed on sponges, corals, barnacles, starfish, and some other bottom-dwelling invertebrates. Females begin to reproduce at age 17-33 and the mating period may last for more than 6 weeks. They produce about 3.9 clutches during nesting.

It is the world’s largest hard-shelled turtle with an average adult weight of 80-200 kg and a maximum length of 84 inches. It has a straight-line Carapace length of 70-95 cm. The head and the Carapace has a yellowish-orange or reddish-brown Color while the plastron is pale yellow. The Carapace is divided into 11 or 12 pairs of marginal large plates/scutes. 5 vertebrates scutes run down the midline of the carapace which is then bordered by 5 pairs of costal scutes. The nuchal scute is found at the base of the head. The carapace is connected to the plastron with 3 Inframarginalised scutes which form the shell bridge. Adults have longer tails and claws than females.