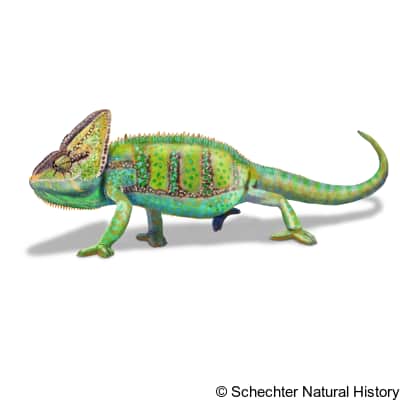 The Veiled Chameleon (chamaeleo calyptratus) is one of the many species of chameleon that is endemic to the Arabian Peninsula in Yemen and Saudi Arabia.

Generally, chameleons are best known for their ability to change color. They can also compress their bodies to appear thinner and branch-like. They are in fact, referred to as masters of disguise. Although these abilities are influenced by age, sex, temperature, light, health status, shedding, presence of a mate, perception of a threat, and other environmental factors, it can occur rapidly or gradually. For example, these chameleons tend to change to a much darker color when stressed. Also, while breeding, females turn from their usual light green to a blackish green color with blue and yellow markings on their body. They are capable of breeding close to three times a year laying large clutches of up to 85 white eggs between 20-30 days after mating. They do head rolls and chin rubs for communication especially during mating sessions. Although the Veil Chameleons are shy and solitary animals, they can also be very territorial and aggressive towards one another especially the male species. They are mostly found dwelling in trees, woodlands, tree-lined roadways and gardens. They are able to live for up to 8 years in warm temperature. These species have a broad appetite though primarily feed on insects, preferably green insects, small birds and mammals. It also feeds on plants and vegetables from which it gets water, especially during the dry season when there is little amount of water.

The veiled chameleon is the commonest of about 80 species of chameleon because of its exclusive and very many features. It is a large chameleon reaching the total length of 24 inches including the tail. This animal is referred to as ‘veiled chameleon’ basically because of the protuberance it has growing on its head. Initially, the casque (protuberance) is small but then grows up to 2 inches in matured species. They are dimorphic having the male and female looking significantly different. The male species have larger and pointed casques and are in turn, larger in size. They have spurs right at the back of their hind feet and unlike the females, longer spines. Females, on the other hand, have smaller heads but are heavily bodied. The chameleon can be gold, blue, yellow, orange, black, etc. but while hatchling, the veiled chameleons are usually light green, patterned with several other colors (E.g. turquoise, yellow, orange, green and black) and eventually, gain the ability to change color and develop stripes as they age. Asides the large casques, the chameleon has an unusually long and sticky tongue that can measure up to twice the total body length. It has an obvious set of long cones on its gular crest and also, thick bands that goes round the body. Interestingly, its eyes are independent of each other; one can focus up while looking to the right as the other looks down and to the left. It has opposed fingers and toes but do not have ear openings or middle ear, although not deaf.