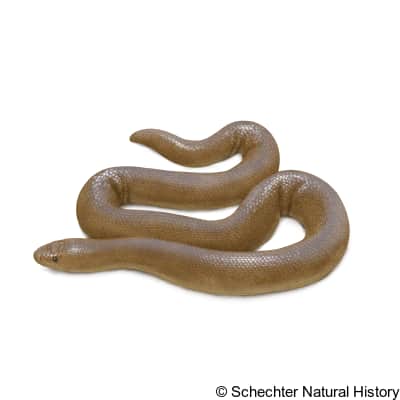 This snake is generally endemic to California. Specifically, it can be found in southern California in a few disjunctive areas including the San Bernardino and San Jacinto Mountains.

The southern rubber boa thrives in oak-conifer and mixed-conifer forests and shelter in rocks and logs or any other debris in the area. The breeding seasons begins in April and ends in June. The luve young are born in late summer or early autumn. They feed on small mammals, birds, and lizards.

This is a non-lethal-to-humans constrictor that reaches a total length of 19.5 and 22 inches for males and females respectively. It has a stout body with shiny, fine, small scales, and a loose wrinkled skin that lends the snake a rubbery appearance. The eyes are small and vertically slit. The tail is usually short and blunt-ended, resembling a head. The head itself is covered with large scales. It has a uniform dorsal color of light brown, dark brown, tan, pink, or olive-green above, and orange, yellow, or cream-colored below. It is usually patternless but some specimens have a dark mottling. The young snakes of this species is pink or tan, sometimes brightly colored.