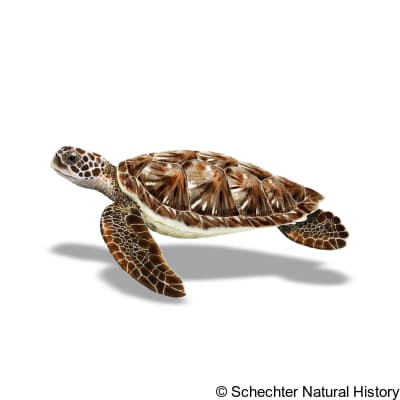 The green sea turtle extends throughout tropical and subtropical oceans worldwide, with the two major subpopulations in the eastern Pacific and the Atlantic Ocean. They are reported to inhabit coastal areas of over 140 countries, with over 80 states with nesting sites. In the US Atlantic coast, the green sea turtles can be seen from Texas, and north to Massachusetts, while they are found in southern California, north to the southernmost tip of Alaska, from the US Pacific coast.

They move across 3 habitat types, depending on their life stage. Eggs are laid on beaches, mature turtles spend time in shallow coastal waters, and adults spend time at lagoons and shoals. Generally, their habitat include coral reefs (which provides green, red, and brown algae for feeding and protection against predators and rough storms.), salt marshes, and seagrass beds. Their behaviour changes as they grow. New hatchlings are carnivores as they feed on fish eggs, jellyfish, sponges, while immature juveniles and adults are herbivores and Omnivores. Females mate every 2-4 years and dig a hole, 11-12 inches in the ground to deposit a clutch size of 85-200 eggs.

It has a dorsoventrally-flattened body, a beaked head at the end of a short neck, paddle-like arms, suitable for swimming, and an average adult length, weight and carapace length of 5ft, 68-190kg, and 78-112 cm respectively. It has a short snout, an unhooked beak, and a denticulated edge on the sheath of the upper jaw. The green sea turtle has a pair of prefrontal scales on the dorsal surface of its head. Its carapace has 5 central scutes, surrounded by 4 pairs of lateral scutes. The pigmentation of a juvenile’s carapace turns dark-brown to olive, while it is entirely brown, spotted and marbled in adults.