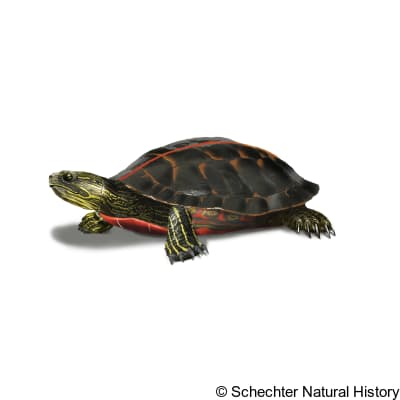 he Cherysemys dorsalis is a turtle native to North America. It is found in freshwater from Canada through the United States to northern Mexico, found across from the Pacific coast to the Atlantic coast.

They hunt along water bottoms by jutting their heads in and out of the vegetation to stir out potential victims. It holds its victims in its mouth and tears them apart with its forefeet. It also consumes plants and skims water surfaces to catch minute particles of food. They are most vulnerable to larger predators when young including garter snakes, water snakes, gray squirrels, humans, rice rats, and weasels. They mate in springs with females starting their reproductive cycles mid-summer with the females capable of storing sperm for three cycles of clutches of eggs and sperms remaining viable for up to three years. The females nest the eggs in nests that are about two to four inches deep and incubates the eggs for about 80 days.

The turtle has a long oval shell measuring 10 inches despite its scale-like overlaps is smooth. Its color varies from olive to black with its bottom shell being yellow. It has a webbed feet which aid swimming with a distinctive head detailed by a face with yellow stripes and a large yellow spot and streak behind each eye. The yellow strips continue on the chin and meet at the jaw with upper jaws forming an inverted V with downward-facing, tooth-like projections on each side. It is a colorful aquatic turtle that has the outer edge of its shell often orange to orange-red or yellow with the lower shell being plain yellow and often time having a faint brown blotch along its center.