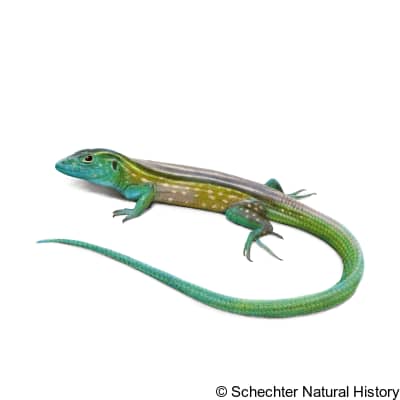 The Rainbow Whiptail is a species of lizard endemic to Central America, the Caribbean and Northern South America. They’re frequently spotted alongside sandy beaches or near woodland edges. It has additionally been introduced in Florida, USA and has established populations there.

The Lizards are found in open sunny zones on sandy beaches and generally stay around areas where there is a good water source. They are diurnal and are active throughout most of the day, foraging and hunting for insects to eat. The use of their tongue extrusion aids them in locating insects and fruit sap. As a strategy for escaping active aerial predators, the lizards may camouflage under vegetation to avoid attacks. After reaching adulthood, they return to mating zones where the males compete in agonistic behavior for the females. The reproductive period generally lasts for six to seven months, in which female whiptails typically produce three clutches per year. They produce one to three eggs per clutch and lay them in sand burrows.

The Rainbow whiptail averages about 12 inches in length. As hatchlings, they have nine pale white horizontal stripes with dark blue or brown areas involved. These stripes are not always consistent with each other, and some may stand out more than most. Each primary stripe is labeled as either ventrolateral, lateral, dorsal, or paravertebral. The vertebral or mid-dorsal stripe located between the paravertebral stripes is the least defined and strongly colored. As juveniles, they develop distinct spotted markings along their hind legs. However, the males lose their spots after they mature, and the women spots remain giving the female’s coloration a tendency to be duller looking, while males show exceptionally vibrant colors. Thus, the name ‘Rainbow’ Lizards.