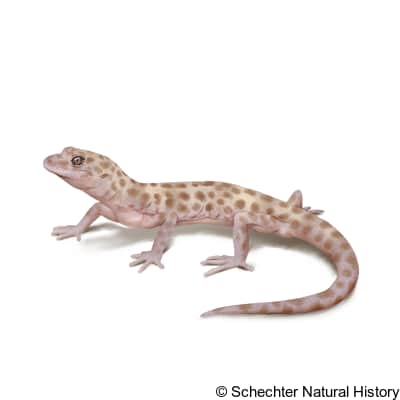 The reticulated banded gecko has a small area of distribution and is native to Texas, United States and Mexico.

The reticulated gecko dwells in cracks and crevices in dry and rocky regions with other similar species and because of that, is often mistaken as the Texas Banded Gecko although the reticulated gecko is larger in size. It is nocturnal but takes cover when the daytime temperature or environment seems harmful. For instance, when exposed to natural or artificial lighting, the eyes immediately begins to dilate. It is classified as a coldblooded reptile and so outsources heat or cold as needed. Ideally, the reticulated gecko is terrestrial but not as terrestrial as similar species. It has a detachable tail used as a distraction when threatened or under attack. It is considered small but smart as it stalks and sneaks on preys like cats putting out one leg at a time. It is considered a carnivore hence, feeds majorly on various types of small arthropods (invertebrates) ranging from beetles to cricket, grasshoppers, ants, etc. It is dimorphic and considering that reproduction is oviparous, at about a month after mating, the female specie lays eggs and give in approximately two months for incubation, before producing a gecko.

The reticulated gecko is a large gecko with an average length of 5inches. Although the skin is thin, supple and flexible, its whole body is covered with rows of tubercles and small granular scales on the dorsal part except the belly which appears tan and patternless. Its base coloration is usually pink but with several brown bands all round. In matured species, these brown bands become reticulated, forming a series of network, hence, the name ‘Reticulated Banded Gecko’. It has a large pair of eyes and moveable eyelids. It has a long and prehensile tail, spindly legs, slender and paddless toes.