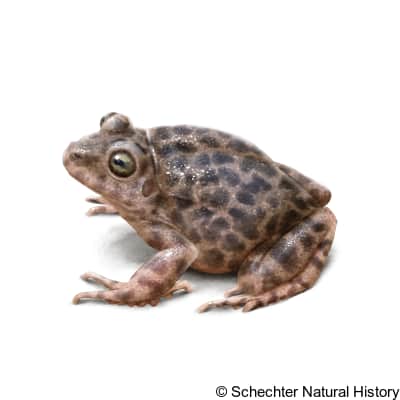 This species of frog occurs in majorly Mexico but can also be found in southern parts of the USA. In the USA, it is particularly found in Arizona and its rocky outcrops in the Patagonia, Pajarito, Santa Rita, Huachuca, and Quinlan mountains. And it might also be found in the southeastern mountains.

Caves, outcrops, scrubby trees especially oak, serve as shelter and protection from extreme climate for the frogs. Female barking frogs lay their eggs in these moist rock crevices, outcrops, and caves. Young frogs do not go through an aquatic stage, they instead hatch directly from eggs. Barking frogs eat grasshoppers, crickets, scorpions, silverfish and a lot of other types of invertebrates.

The frogs’ average length is 3.75 in. The frog is peculiarly toad-like and has skin colored olive-gray to rusty gray spotting dark blotches in irregular shapes. The frog has an intratympanic fold (a fold of skin across the back of the head). The feet end with tubercles but are not webbed. Female barking frogs are bigger than their male counterparts and possess a pink tympana and white throats all year. Unlike the males who have a darker colored tympana and have a dark throat only in the mating season. Juvenile frogs are not much different from adults but sometimes have large black patches on their heads or lower bodies.